When Filming in Burkina Faso 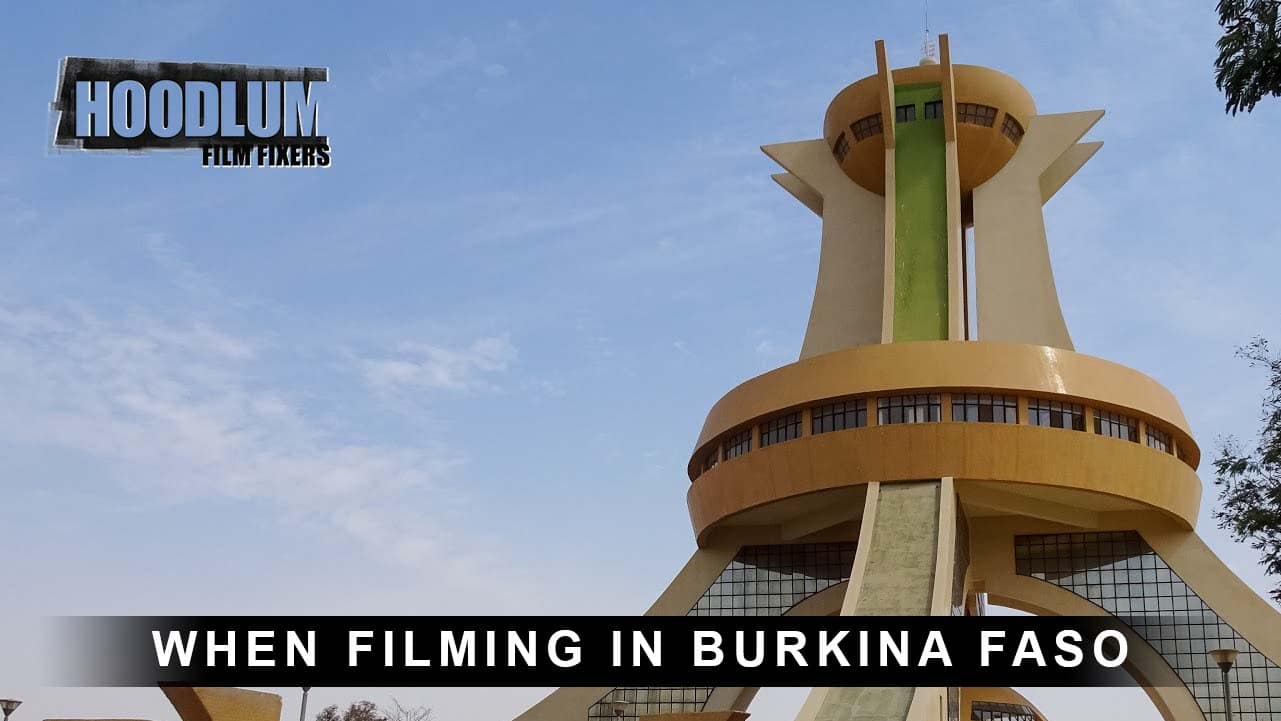 Burkina Faso is a landlocked nation in West Africa. It is surrounded by six countries: Mali to the north, Niger to the east, Benin to the south east, Togo and Ghana to the south, and Côte d’Ivoire to the south west.

Burkina Faso has a primarily tropical climate with two very distinct seasons: the rainy season with between 24-35 inches (600 and 900 mm) of rainfall, and the dry season during which the harmattan blows, a hot dry wind from the Sahara. The rainy season lasts approximately 4 months, May/ June to September, and is shorter in the north of the country.

Burkina Faso is one of the poorest nations in Africa and, quite possibly, the world. However, what it lacks in resources and wealth, it more than makes up for in spirit and natural beauty ,the natural landscapes range from the rugged terrain of the Sindou Peaks to the abundant wildlife found at Lake Tengrela or the four of Burkina Faso’s national parks.

Film Locations of note are:

Ouagadougou is the capital city of Burkina Faso, the home of the country’s administration and economic centres. The architecture here will leave you underwhelmed except for the impressive Roman Catholic cathedral. The city is a true hive of performing arts inspiration, dance, live music, awesome festivals and craft markets.

The city of Bobo-Dioulasso is the second largest city in Burkina Faso. Despite its size, the city has a laid back and exclusive feel which makes it a favourite spot for film makers from all backgrounds and with all budgets. The main attraction here is the nightlife. The live music and restaurants in the city are some of the best in Burkina Faso. The local music on offer in various clubs and bars attracts the residents of the city as well as visitors from Europe and The States.

Banfora is situated in one of the most beautiful regions of Burkina Faso, the Comoe Province. The nearby attractions include Tengrela Lake, which is a great place to spot hippos, especially in the dry season, and the Karfiguela Waterfalls which make for a great hiking or picnic spot. The falls have their own parking area with security for film production.

Gorom Gorom is a town in the north of Burkina Faso, situated at what was once an important location at the crossroads of the Sahel. Each Thursday, traders from all over the country travel to sell their wares at this impressive market. It is a great place for souvenir shopping with items ranging from jewelery to handcrafted leather items.

Tiebele is a small village located right next to Burkina Faso’s border with Ghana. The Kassena people of Africa, one of the oldest ethnic groups of the country, originate from this village and as such there are a great number of traditional mud huts and other architecture all of which are beautifully decorated. The houses here are built entirely from straw and mud but they are decorated with character and pride, making this a great film location

Arli National Park, situated in southeast Burkina Faso, is one of four in Burkina Faso and is home to thousands of animals. The park occupies an area of around 700 square kilometers and species that call the park their home include lions, antelopes, monkeys and hippos. Formerly the park was home to the African wild dog although it is thought that, due to the expanding human population and other factors, the species may have been wiped out in the area. The watering hole in Tounga is one of the park’s most reliable and popular animal watching spots and draws a variety of wildlife year round.

Ruins of Loropeni are at least 1000 years old and serve as a vivid reminder of just how vast and important the cross-Sahara gold trade once was. The site is a Unesco World Heritage site and was the first to be rewarded with such a status in the country. The stone ruins here make for a fascinating day trip and are still, at present, being excavated with many more secrets expected to be discovered with time.

W National Park is shared with both Benin and Niger. The animals situated here enjoy a transition of terrain between savannah and forest and include huge flocks of migratory birds. The park is another of Burkina Faso’s Unseco World Heritage sites. Impressively, the park has also shown evidence of early neolithic settlers.

Nazinga Reserve is near the border shared with Ghana and covers an expanse of around 97,000 hectares. The elephants are the main attraction and is followed closely by the birdlife and crocodiles. The best time to film in the reserve is between the months of December to April. There are various accommodation options in the reserve including the impressive Nazinga Ranch which occupies prime real estate by the reserve’s most lively watering hole.

Sindou Peaks is located in the Loraba Province of Burkina Faso and is mainly know for its rugged rock peaks and surrounding shrubbery. Filming of the peaks are best at sunset.

Ouahigouya has been the center of Mossi culture since it was founded in 1757. It is the fourth largest city in the country. The main attractions here are the market, the street food vendors which serve variations of tasty rice and the Yatenga Chef who is the head of his faith and provides information on Mossi culture on a “pay what you wish” basis.

At Lake Tengrela the hippos here are the main attraction. There is a good chance of seeing hippos all year round.

Bangr Weogo Park is situated in the very heart of Ougadougou city. It has to be one of the most amazing urban parks in the world and has an impressive host of animals and plant life. The park also has a great museum detailing the natural history of the area as well as great restaurants and recreational sports and play areas.

The town of Sabou is most visited for its sacred crocodiles. The crocs are seen as being harmless and remarkably no accidents involving the crocodiles have occurred here for over 70 years. The local residents encourage visitors to sit on one of these critters for a snap. It is forbidden to eat the crocodiles and the wellbeing of the creatures is strictly monitored by the local residents of the town.