When Filming in Eritrea 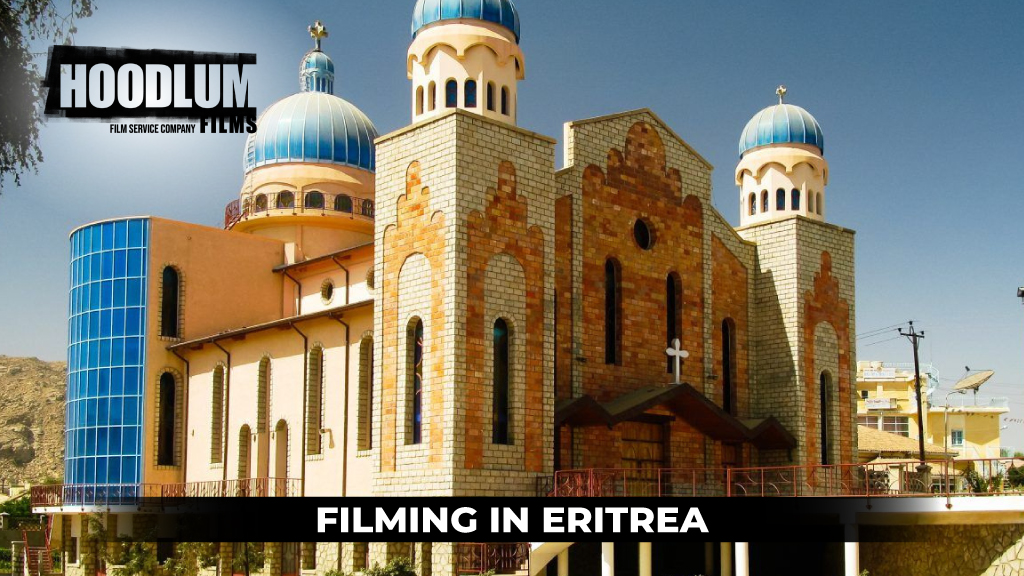 Eritrea is a country located on Africa’s Red Sea coast. It is best known for its Italian Art Deco buildings.
Barley, wheat, and livestock including camels are the main agricultural products.
Eritrea has hosted film productions such as Nike’s Breaking2.
Film locations can be divided into the following six Zobas (regions):

This centrally located region is predominately highland plateau, which is cooler than the regions around the coastal plains. Semenawi Bahri National Park is home to a rich variety of flora and fauna, including leopards and many species of birds.

The northern region is known for the Anseba River and the city of Keren. The region is predominately highland plateau, which is cooler than the regions around the coastal plains.

This southern region is predominately coastal plains. Mount Soira is the highest point in Eritrea. Qohaito is a pre-Aksumite archaeological site.

The region is mostly coastal plains, which are hotter than the regions around the highland plateau. The Dahlak archipelago has unspoilt beaches, turquoise waters, coral reef and underwater photography options. Lake Kulul is in this region. The port city of Massawa, knowns for its Italian, Egyptian and Ottoman architecture is located in this region. There is an old steam train running from Massawa to Asmara that travels over bridges and through striking mountainous landscapes. Adulis is an important archaeological site.

Most locations are possible given time, money and the right approach. Unauthorised photography of military or government installations is illegal. Penalties may include arrest, fines, and confiscation of film equipment. Local Film fixer are violable to manage this for all International Film production.

When to film in Eritrea

The central highlands, coastal region, and western lowlands each have a different climate. Generally speaking, Eritrea has good year-round sunny and dry filming conditions. Short rains fall from February to April and long rains fall from June to September.
The Eritrean National Festival takes place in August. Ramadan is widely observed by the majority Muslim population living in the lowland areas, with many services closed during this period.
Public holidays may affect timing, availability, and costs.
Film fixers will supply detailed information on the above

Brands are looking for local stories that match their brand narrative. Our local researchers are a great lead for sourcing those unique stories and characters.
If you are looking for stories for your next documentary or film, local fixers have access to selection and will make recommendation based on the project brief.
Costs & Tax Incentives

Costs. Film locations, local talent and support film crew are inexpensive but since little to no filming infrastructure exists all key film crew and equipment must be brought in from abroad. Our Eritrean fixer will negotiate local deals and provide the appropriate level of production support to match every budget.

Tax Incentives. At present there are no Film tax incentives for foreign commercials or feature films shooting in Eritrea.

Film crews. Eritrea has a very small pool of local directors, videographers and stills photographers. Key crew should be brought in from abroad or sourced by the local film fixer from Kenya or Dubai. Eritrea’s proximity to Dubai and Kenya allows easy access to those experienced film crews. Local Eritrean directors, DP’s, photographers, videographers (cameramen / camera operators), camera assistants (focus pullers), sound operators, grips, gaffers, stylists, hair and makeup, PA / runners, production driver, or any other film crew for your shoot in Eritrea will also be sourced by the local film fixer or line producer

Talent day rates and buyouts are negotiable. The Tigrinya and Tigre make up the vast majority of Eritrea’s nine ethnic groups. All other talent needs to be brought in from abroad.

Film cameras, lighting and grips. Only the most basic Film camera, lighting and grip equipment is available locally. You will need to bring in most standard equipment from abroad. Please note, all electronic equipment including cameras and laptops need to be declared upon arrival. Failure to do so may result in their confiscation by customs officials when you depart. The local film fixers are also able to bring in film gear from Kenya or Dubai

Communication is key. Our agility and global experience allows us to customise the right communications systems for every shoot.

For clients that are unable to attend set we offer a virtual video village solution. This dedicated and secure high-resolution video streaming platform allows clients from one or multiple timezones to view setups without compromise and to participate in real-time with the team on set. Separate systems can be set up for the discrete conversations that are required to make a job run right. Working remotely with our local teams reduces your content production costs, turnaround times, carbon footprint, and risks associated with unpredictable global events.

Studios and backlots. None exist at present.

Most nationals are required to have a visa to enter Eritrea. Contact your closest Eritrean embassy or representative for more information. Travel outside of Asmara requires a special permit from the Ministry of Tourism. Our local fixer in Asmara is able to assist with the process to ensure the application process runs smoothly.