When Filming in Gambia 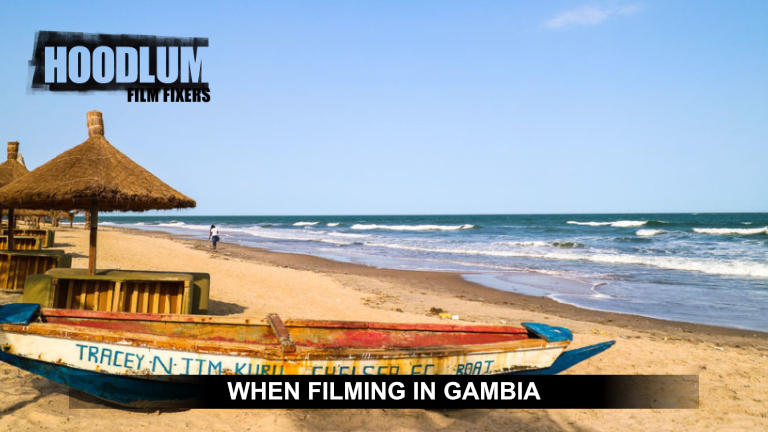 WHAT OUR LOCAL FILM FIXERS HAVE TO SAY ABOUT FILMING IN THE GAMBIA,AFRICA

The Gambia is situated in West Africa on the Atlantic coast and surrounded by the neighbouring country of Senegal. It occupies a long narrow strip of land that surrounds the Gambia River. The land is flat and is dominated by the river, which is navigable throughout the length of the country.

Gambia has a tropical climate. The best season to film is from November to May during the cool dry season.

Untold stories of the Gambian people, wildlife documentaries and cultural festival attract film makers and photographers from all over the world.

Gambia is predominately a Muslim country. Public holidays affect film crew availability and Ramadan is widely observed with Film services closed during this time. Our local film fixers will be able to advise on this.

Locations, local talent and support crew are inexpensive but since little to no filming infrastructure exists all key crew and equipment must be brought in from abroad. Gambian film fixer will negotiate local deals and provide the appropriate level of production support to match every budget.

At present there are no tax incentives for foreign film production in Gambia.

Only major roads are paved otherwise many roads are in disrepair and during the rainy season many roads cannot be used. Road travel by night is not recommended. Gambian film fixer organise safe and reliable 4WD transportation. Travel along the Gambia River and other waterways is a common way to get around. Several international airlines service flights to Gambia.

Gambia has several film-friendly five star hotels to choose from. For those looking to stay with local Gambian communities film fixer are able to organises hosted accommodation.

WHAT OUR LOCAL FILM FIXERS HAVE TO SAY ABOUT FILM PERMIT ,VISAS AND WORK PERMITS WHEN FILMING IN THE GAMBIA,AFRICA

Most Western crews can enter Gambia visa-free for stays of up to 90 days. US citizens are required to get a visa from the Gambian embassy. Visas on arrival are also an option for Film

productions with a tight deadline but will require our Gambian film fixer to submit their passport to the Department of Immigration in Banjul 48 hours prior to the issue their visa. Evidence of yellow-fever vaccination is also required for entry into Gambia. A project synopsis may also be asked for.

Film location permits are easily obtainable but it is recommended that a local film fixer and location manager provide this service as unauthorised photography of government buildings, airports, military installations, embassies, bridges, or government motorcades, is against the law. Penalties include fines, imprisonment and confiscation of equipment.

For drone filming permits, permission is required from several governing bodies depending on the location. That may include government authorities, village elders, or local police. It’s easiest to hire a drone from a local registered media company.

WHAT OUR LOCAL FILM FIXERS HAVE TO SAY ABOUT FILM LOCATIONS IN THE GAMBIA,AFRICA

The country follows the Gambia River, which is the defining feature of the landscape.

The region is divided into 5 film location options

Banjul is the capita and is known for its busy harbour, British colonial architecture, Banjul Central Mosque and the Albert Market.

Abuko Nature Reserve and Bijilo Forest Park are home to a variety of monkey species.

Tanji Bird Reserve is renown for its variety of birdlife.

Tanji Fish Market is a vibrant location known for its pirogues and busy fish market stalls set up on the beach.

Kunta Kinteh Island is home to the ruins of Fort James.

Bao Bolong Wetland Reserve is a landscape of mangroves. salt marshes, and savannah home to West African manatees, hyenas, leopards, monkeys, and a variety of birdlife.

The Lower River division is located in the central part of the country, south of the Gambia River.

WHAT OUR LOCAL FILM FIXERS HAVE TO SAY ABOUT FILM CREWS,EQUIPMENT AND TALENT IN THE GAMBIA,AFRICA

English is the official language. Gambia has a very small local pool of directors, videographers and stills photographers. Key film crew should be brought in from abroad or neighbouring Senegal, Ivory Coast or Ghana.

Talent day rates and buyouts are negotiable. Gambia offers mainly African looking talent. The Mandinka are the largest ethnic group, followed by the Fula, the Wolof, the Jola, Serahuli and the Aku. All other talent needs to be brought in from abroad or in some cases from neighbouring countries such as Ghana.

All film equipment will have to be shipped from neighbouring African countries.