When Filming in Ghana 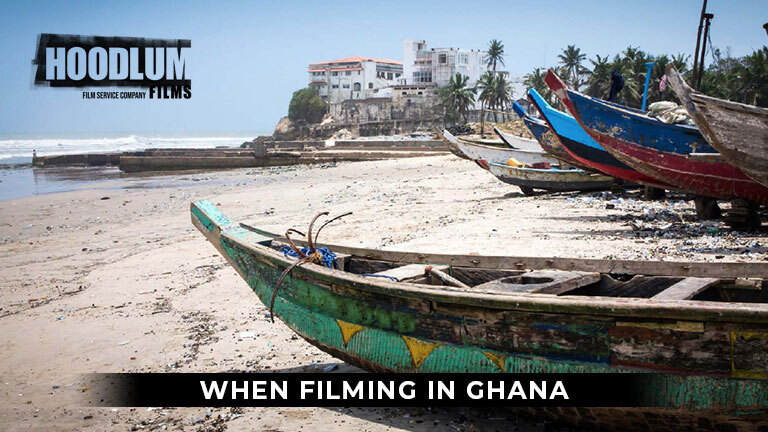 Ghana is situated on the coast of the Gulf of Guinea in western Africa, Ghana is bordered to the northwest and north by Burkina Faso, to the east by Togo, to the south by the Atlantic Ocean, and to the west by Côte d’Ivoire.

Ghana has a tropical climate and is hot with the coastal region being humid and the north dry. It rains in Ghana from April to June and again from September to November. The dry seasons run from November to March and July to August.
film production companies.

Accra is the capital and is Ghana’s largest city. A film location delight with its National Theatre, many restaurants, the Green Plane, Kwame Nkrumah Memorial Park & Mausoleum and the Black Star Square which commemorates its independence.

Kakum National Park is known for its elephants, birdlife and canopy walks.

Kokrobite offers good surfing near Accra. A four hour drive from Accra the town of Busua is the surfing capital of Ghana. Further still Cape Three Points is another good break to film surfing. Other beaches of note include Labadi Beach and Bojo Beach.

Kumasi is Ghana’s second largest city and is home to the busy Kejetia Market.
Owabi Wildlife Sanctuary reknown for its butterflies and birdlife.

Bui National Park is known for its hippo population, as well as being home to the endangered black-and-white colobus monkey.

Bia National Park has some of Ghana’s last remnants of untouched forest, with some of the tallest trees in West Africa.

Boabeng-Fiema Monkey Sanctuary is home to around 700 monkeys.

Lake Bosumtwi is a crater lake.

Lake Volta is one of the largest artificial reservoirs in the world. The construction of Akosombo Dam created Lake Volta.

Mole National Park is known for its elephants, hippos, monkeys, crocodiles, and birdlife.

Larabanga Mosque is built in the Sudanese architectural style.

When to film in Ghana.

Ghana has a diversity of traditions honoring religion, ancestors, rites of passage, and harvest. Of particular interest to filmmakers and photographers include:

Public holidays may affect timing, Ghana film fixers will advise on these

Costs. The favorable exchange rate means that most major currencies go far in Ghana. Locations, supporting crews and talent are by world standards very inexpensive. The major costs are having to fly in equipment and key crew. Ghanaian film fixers will negotiate local deals and provide the appropriate level of production support to match every film budget.

Film crews. Ghana has a Film and Television Institute that turns out a small pool of local directors, videographers and stills photographers

Talent day rates and buyouts are reasonable and negotiated on a personal basis. Local casting facilities are quite basic so street casting is often required. More than 250 languages and dialects are spoken in Ghana. Only West African looks are available in abundance. All other talent looks are best cast abroad.

Film equipment. Ghana has film cameras, lighting and grip equipment available locally. Crews bringing in their own gear will need our Ghanaian fixer / line producer to apply for a customs insurance bond on equipment to be imported.

For clients that are unable to attend a virtual video village solution is available locally in Ghana. This dedicated and secure high-resolution video streaming platform allows clients from one or multiple time zones to view setups without compromise and to participate in real-time with the team on set. Separate systems can be set up for the discrete conversations that are required to make a job run right. Working remotely with local film teams reduces production costs, turnaround times, carbon footprint, and risks associated with unpredictable global events.

Press Accreditation is required for all foreign film crew entering Ghana. This usually takes 2-3 days to process once all visiting film crew documentation has been submitted. Ghanaian Film Fixers will provide a Letter of Invitation for visa applications. Proof of yellow fever vaccination is also required to enter Ghana.

Ghana is a West African gem. It is a relatively stable, low crime country in a region not known for peace and stability.

You should always greet people from right to left, and always with your right hand. Your palms should always be properly aligned for greeting people when going right-to-left. Always follow this order, regardless of the age, gender or status of the people you are greeting.
Always use your right hand to give and receive items, and to eat. In Ghanaian culture, your left hand is considered your ‘toilet hand’. It is a common practice to give money in shops with your right hand while at the same time receiving your purchase into the same hand.
Throughout Ghana when visiting villages and towns it’s customary for visitors to pay their respects to the local Chief when they visit. The Chief has been elected to this position usually by a council of elders, however the elders do have the power to overrule a chief’s decision if he acts inappropriately.
Ensure that you are not wasteful in any way during your time in Ghana. Every little thing in Africa has value. You will notice that the rubbish bins in homes and hotels are tiny, as not much is considered waste. It’s appreciated if you offer anything that has no value to you, to any person, anywhere.