When Filming in Morocco 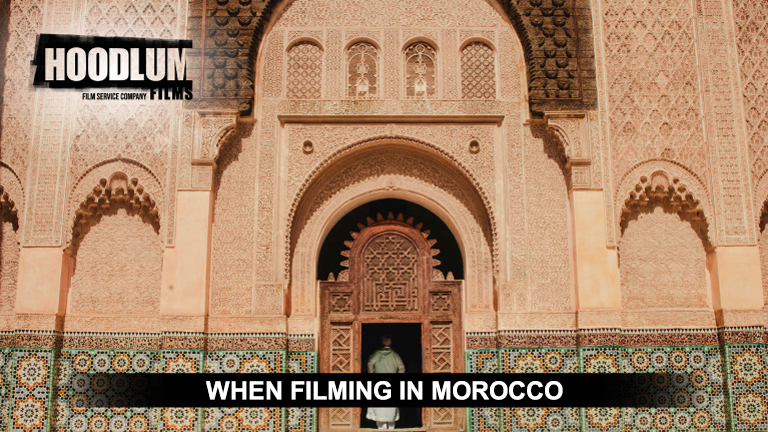 Morocco is a choice location for international filming  and offers the world’s most sort after desert settings. It is situated in North West Africa and is bordered by Algeria and Mauritania.

The local Moroccan film crew and film fixers are experienced and well versed in big-budget filmmaking.

The BBC have been a regular visitor for Television series such as Atlantis and biblical dramas such as The Ark, Political miniseries, The Honourable Woman decided on Morocco their shoot location when Jordan became a security risk during their specific shoot window. American TV shows have included Tut, set during the short reign of the Egyptian pharaoh Tutankhamun.

The climate in Morocco is very regional. The coast has a warm, Mediterranean climate but with south-west trade winds on the eastern coast. Inland it is a hotter and drier continental climate.

The south is hot and dry for most of the year, although it can get very cold at night. The mountains are cooler. Rain falls from November to March in the coastal areas.

Film equipment and film cameras are readily available with the option of sourcing additional equipment from Spain.

Art and set construction departments are good and much cheaper than their European counterparts. Art directors, prop masters and wardrobe mistresses have had plenty of experience in servicing international film production in Morocco.

For film production companies planning on bringing film equipment into Morocco, the ATA carnet system would be the best approach.
The ATA carnet, also known as the merchandise passport, is an internationally recognised customs document that allows goods to move into foreign markets free of duty and tax.
It is recognized in 85 countries and territories and Morocco is a member country of the system.

A shooting permit issued by the Moroccan Cinematographic Center is required for filming in Morocco. Additional location film permits may be required for specific film locations. Local film fixers and location scouts will arrange these for all international film production companies shooting in Morocco

Morocco is a very cost competitive film location. Moroccan service producers / fixer will negotiate local deals and provide the appropriate level of film production support to match every budget.
Morocco offers a 20% film production cash rebate. Foreign film productions brought into Morocco are required to spend at least USD 1 million and the project must run for at least 18 working days.

Film Crews. Morocco has a small pool of local film directors, videographers and stills photographers. There is a growing pool of experienced supporting film crew although many productions still bring in their own key crew. It’s a good idea to have a local Arabic-speaking AD for projects with a large crew and talent size. Morocco’s close proximity to major European production centres allows easy access to those film crews should you ever need to look further.

Contact us if you are looking for a Film director, Director of Photography, photographer, videographer (cameraman / camera operator), camera assistant (focus puller), sound operator, grip, gaffer, stylist, hair and makeup, PA / runner, production driver, or any other film crew for your shoot in Morocco.

Talent is non-union and buyouts are negotiable. Day rates are very reasonable and negotiated on a personal basis. Moroccans are of Berber or mixed Arab-Berber decent. Morocco’s relatively close proximity to major European production centres allows easy access to those pools of talent should you ever need to look further. Talent agencies exist in Casablanca.

Crews travelling on Western passports can enter visa-free for stays of up to 90 days. Contact your local Moroccan embassy / representative for more information.

On the whole Morocco is a safe place to film. In a desert camp area, safety by local gendarmerie and / or military is provided.