When Filming in Namibia 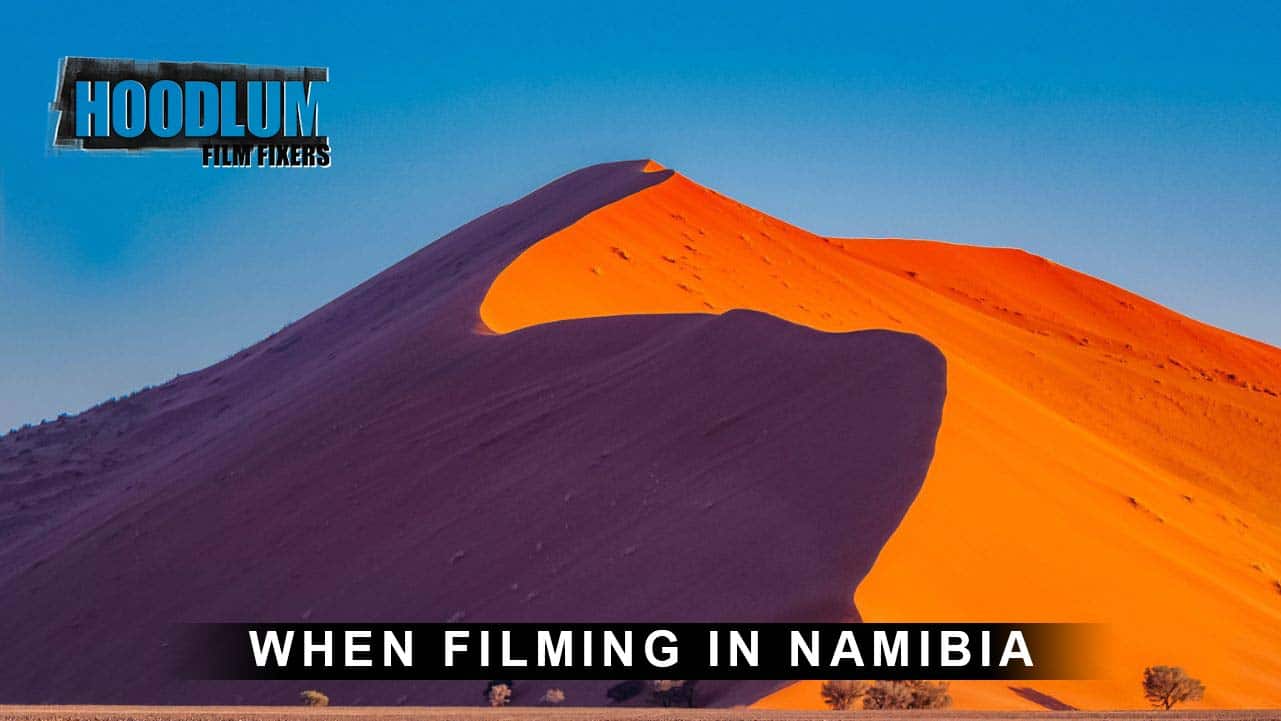 Namibia is located in southern Africa and is bordered by the Atlantic Ocean in the west, Angola to the north, Zambia and Botswana to the east, and South Africa to the south.

Mostly, Namibia has a subtropical desert climate characterized by great differences in day and night-time temperatures, low rainfall, and overall low humidity. Namibia experiences winter and summer at opposite times as Europe and North America and they correspond to the Dry and Wet seasons. Namibia – one of the sunniest countries in the world … With an average of 300 days of sunshine annually Namibia is one of the sunniest countries in worldwide. Some rain falls from November to April.

The language in Namibia consists of around 30 different languages. English is  the official language of the country; however, there is only a small percentage of the population who use English as their home language.

The currency in Namibia which is the Namibian Dollar is equivalent to the South African rand and both currencies are used to trade in the region. Euro, British Pounds, US Dollars and other major currencies may be traded locally or in advance of departure. In addition, exchange facilities are available in the various offices of change and banks in the major cities of ATMs. It is best to request bank notes in smaller denominations, as it can often be difficult to get a change from large notes, and smaller notes are handy for smaller transactions.

Namibia has a well-established road infrastructure. Most towns and communities can be reached by a network of quality gravel trunk, main and district road networks totalling 48,117 km, including 4,500 km of tarred roads. While getting around Namibia’s relatively few population centres is possible by bus, and even rail in some cases, to reach most of the parks, reserves, and other places you are most likely to want to visit, you will need to book yourself on a tour or rent a vehicle.

While no country in the world can claim to be free of crime, Namibia ranks as one of the safest and most politically stable nations in Africa. This may have something to do with its relatively small population size, or the good governance the country has enjoyed over the past years.

At present there are no tax incentives for foreign commercials or films shooting in Namibia.

The north is Namibia’s most densely populated area, and home to the country’s largest ethnic group, the Ovambo. This regions has a number of national parks home to the African elephant, rhinos, zebras, giraffes, wildebeest, hyenas, buffalo , sable and lions.

The Etosha pan is one of the largest salt flats in the world and at The Vingerklip is an unusual rock pinnacle that rises up from a vast flat expanse. Twyfelfontein is a site of ancient rock engravings and Epupa Falls are a beautiful film location.

In the east,Windhoek is the capital and main entry point by air. Locations of note include the Tintenpalast, National Botanic Garden, Independence Memorial Museum (designed by North Korea’s Mansudae Overseas Projects), Christ Church, Windhoek and Hosea Kutako International Airport, and Katutura township. Daan Viljoen Game Reserve is located on the outskirts of Windhoek.

The Kalahari desert covers much of the eastern part of this area.

Cape Cross is known for its seal colony.

Swakopmund is known for its German colonial landmarks including the Swakopmund Lighthouse and the Mole. The Moon Landscapes are located nearby.

Located south of the Tropic of Capricorn, this area includes the regions of Hardap and Karas.

Deadvlei is a white clay pan known for its dead acacia trees and surrounding red sand dunes. Filmmakers have used the iconic location for everything from fashion shoots, to advertising skin care products, to portraying an otherworldly dream-like place. Early morning or late afternoon is the best time to film for light and to stay out of the intense midday heat.

Sossusvlei is known for its magnificent red sand dunes. Dune 45 is a popular location for sunrise photography.

The Quiver Tree Forest is home to the trees of the same name. Trees bloom bright yellow flowers from June to July. Locals believe anyone who worships these trees will find good luck.

The Sperrgebiet is a diamond mining area.

Shark Island is a former concentration camp located off the coast of Luderitz.

International film productions require a General Film Permit from the Namibia Film Commission at least 3 weeks prior to arrival. Namibian film fixers / service producers assist with the application process. Upon receipt of the General Film Permit additional permits will apply for specific locations, shooting b-roll in cities, shoots that require exclusive use of public space, filming in national parks, drone filming, or filming with tribes such as the Himba and San people. An environmental officer is required to be on set each day of filming in a national park. Additional fees apply..

Namibia has some basic camera, grip and lighting equipment available locally. Nearby South Africa has a very good range of standard and specialized equipment. For film productions looking to bring in film equipment from abroad or neighbouring African countries, Namibia is an ATA carnet country.

Talent day rates and buyouts are negotiable on a personal level and very reasonable. English is the official language. Afrikaans is most commonly spoken between locals. Oshiwambo is spoken by the largest tribe.The Ovambo are the largest ethnic group. Minority groups of note include the Kavango, Herero (including Himba), Damara, Nama, Caprivian, Bushmen (San people such as the !Kung), Tswana and White Namibians. Namibia’s close proximity to South Africa allows access to that significant talent pool should you ever need to look further.Namibia also has animal actors available for filming including lions, monkeys, zebras and cheetahs.