When Filming in South Africa 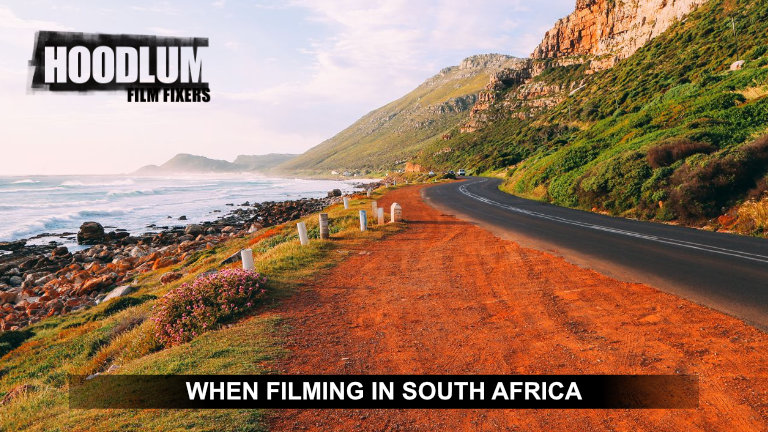 South Africa is located at the southern tip of Africa and is bordered by Namibia, Botswana, Zimbabwe, Mozambique, Swaziland and Lesotho. It is a vast country with widely varying landscapes and has 11 official languages, as well as an equally diverse population of 59 million people.

South Africa has a lovely, temperate climate with plenty of sunny, dry days. The main factors influencing conditions are altitude and the surrounding oceans. The east coast is on the Indian Ocean, which has a warm current. The west coast is on the Atlantic Ocean with a cold current. Western Cape gets most of its rainfall during its relatively cold winter season. The rest of the country is generally a summer-rainfall region with mostly moderate sunny days but very cold nights. This makes for year-round film production!

South Africa has a long history of film production and is amongst the oldest film industries in the world. Over the past ten years the industry has produced an array of award-winning films, television series, documentaries, reality shows and commercials.

South Africa as a film location has a perfect blend of conditions, infrastructure, cost benefits and expertise which all adds up to high production value.

International filmmakers value the passion, energy and work ethic of South Africa’s highly skilled film crews and technicians, and the ready availability of the best technical equipment and infrastructure. Filmmaking provides 25 000 local jobs in the country.

There are no film crew unions in South Africa and conditions are generally negotiable. However, there is a very strict code of conduct, with mutual respect between crews and producers. The general acceptable practise on films is for crews to work 12 hours per day including wrap out time and the main meal. On shoots of 4 weeks or less, crews generally work a 6-day week, 12-hour day including travel and a main meal. On longer shoots it is preferable to shoot a 5-day week or to alternate between 5- and 6-day weeks. This latter practise becomes highly advisable for shoots longer than 6 or 8 weeks.

South Africa has a staggering array of architecture and location options – just about any familiar scenery on the planet; city life and infrastructure; beaches, vineyards, forests, crop lands, mountains, dunes; the best of Africa’s bush and savannah settings.

Privately owned film locations attract variable fees and these are negotiated by local film fixers and location scouts. All public spaces require a film permit and these take about 5 working days to obtain. Authorities issue film permits in South Africa based on an online request. Film fixers contact the local councils from the regions where the shooting takes place. Authorities recommend considering the calendar when applying for permission.

South Africa offers a wide range of all the latest in Camera gear, lighting, grips, digital and film products from the world’s leading manufacturers all maintained to the highest standard by internationally trained technicians.

The country has over the years built a solid reputation as a film destination of choice by international film production companies. From major feature films and TV dramas, to reality shows, documentaries, commercials and brand stories.

South Africa is a Carnet Country. Documentation is completed at port of origin. Film producers bringing film gear into the country will need to travel with proof of ownership and value of the gear.

The South African film industry has a large database of casting agents all of whom in turn have a cosmopolitan database of online talent complete with z cards and video clips. Cast that have worked extensively on international filmmakers sets on location in South Africa. Talent performance and usages are set out in the CPA /NAMA / PMA / SAPAMA – International performers agreement readily available from local film fixers.These form the basis of the cast contract entered into between the artist,agent and the film fixer ,production house or client.

A streamlined booking process makes it easy. Start off with an email detailed brief with the requirements – the more specific the better. Bookers get to work

on finding the most suitable candidate. Artists are then requested to send a self-tape, attend a meet on a ZOOM or WhatsApp Video call, or attend a casting for an audition or call-back, by appointment. For selected talent/cast a full booking sheet with all the relevant information, including ID number, SARS tax reference number, contact number and sizes is produced. If required, wranglers are able to remain on set to help with any further requirements throughout the day, for an additional fee.

Remote viewing stations are available for client, production house and director participation. Final call backs and wardrobe calls are set up at studios and/or costume houses.

Foreign film productions can receive between 20% to 25% of the South African spend, capped at 50m Rand. Filming on location in South Africa, the incentive will be calculated as 20% of the Qualifying South African Production Expenditure (QSAPE).