When Filming in Uganda 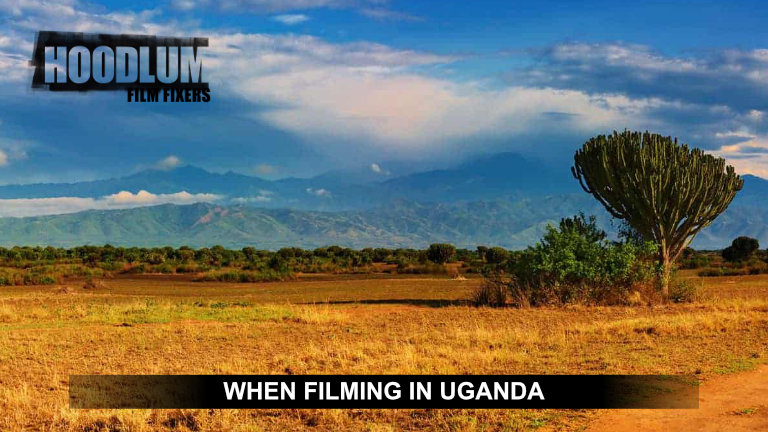 WHAT OUR LOCAL FILM FIXERS HAVE TO SAY ABOUT FILMING IN UGANDA,AFRICA

Uganda is located in eastern Africa, west of Kenya, south of South Sudan, east of the Democratic Republic of the Congo, and north of Rwanda and Tanzania. It is in the heart of the Great Lakes region, and is surrounded by three of them, Lake Edward, Lake Albert, and Lake Victoria.

Uganda has a warm tropical climate, with temperatures ranging from 25-29°C (77- 84°F), apart from in the mountainous areas, which are much cooler; the top of Mount Elgon is often covered with snow. The hottest months are December to February. The rainy season is from March till May and October till November.

Uganda is a very safe country, but opportunistic crimes such as petty theft, credit card fraud, and home robbery do occur – just like any other country. Chances of being a victim are rare, and incidences would most probably be in cities like Kampala

Uganda is home to one of Africa’s most diverse ranges of African landscapes and wildlife and has hosted films including The Last King of Scotland (2006), Queen of Katwe (2016), Congo (1995), and The African Queen (1951).

English, inherited from the colonial period, and Swahili are the official languages; the latter was added in 2005. There is also a Ugandan Sign Language.

Film locations, local talent and support film crew are inexpensive but since the regions offers minimal infrastructure and as such all key film crew and equipment must be brought in from neighbouring countries. Local film fixers will negotiate local deals and provide the appropriate level of production support to match every budget

WHAT OUR LOCAL FILM FIXERS HAVE TO SAY ABOUT FILM PERMIT ,VISAS AND WORK PERMITS WHEN FILMING IN UGANDA,AFRICA

Film permits in Uganda are known as press accreditation and is issued in the form of a media card. The cost for international film crew staying in the country for under 30 days costs a little less than $200. Allow plenty of time for this process. An urgent application can be made for a rushed job but this costs considerably more.

Film location permits are easily obtainable, but it is recommended that a local film fixer and location manager provide this service. This process takes about a week.

For drone filming permits, permission is required from several governing bodies depending on the location. That may include government authorities, village elders, or local police. It’s easiest to hire a drone from a local registered media company.

Uganda accepts temporary import/export of goods. A carnet stamp is either provided or a single administration document which the local film fixers take care of. A non-refundable fee of 10% of the value of the equipment is payable and proof of ownership is required.

WHAT OUR LOCAL FILM FIXERS HAVE TO SAY ABOUT FILM LOCATIONS IN UGANDA,AFRICA

Uganda is famous for its unique beauty, lush green scenery, and beautiful weather. Its tropical weather is hugely influenced by Lake Victoria, which is the source of River Nile, the longest river in the world.

Uganda is blessed with several other large lakes such as Lake Kyoga, Lake Albert, Lake Edward and Lake George, among others. The south-western part of the country is filled with rough terrain and high mountains such as Mountain Rwenzori. The rough terrain landscape team with wild animals such as crocodiles, elephants, lions, gorillas, chimpanzees, and hyenas. Add the beautiful and breath-taking Murchison Falls to this mix and one can easily understand why Uganda is amongst the most sought after film locations in the world.

WHAT OUR LOCAL FILM FIXERS HAVE TO SAY ABOUT FILM CREWS,EQUIPMENT AND TALENT IN THE UGANDA,AFRICA

Uganda has all the standard camera, grip and lighting equipment available locally. For larger productions, bringing in gear is a simple process. Customs fees are around 10% of the value of imported equipment. Provide your local film fixer with a comprehensive list of required equipment and he/she will source from Nairobi, Kenya, the closest regional film production centre.

Talent day rates and buyouts are negotiable. The Ugandan talent pool is limited to African looks. The main ethnic groups are the Bantu, Nilotic and Central-Sudanic people.

WHAT OUR FILM FIXERS HAVE TO SAY ABOUT LOCAL TRAVEL,ACCOMMODATION AND COMMUNICATION

The condition of major roads varies considerably. Rural roads are made of a hard packed earth so when heavy rains come, many become dangerous or impassable. Best to avoid travel by night. Our local Ugandan film fixer organizes safe and reliable 4WD transport. Several international airlines service flights to

Internet can be slow and unreliable.

The virtual video villages work well, and web posted casting, scouting, and videoconferencing are on offer.

Dedicated and secure high-resolution video streaming platform allows clients from one or multiple time zones to view setups without compromise and to participate in real-time with the teams on ground. Separate systems can be set up for the private client links.