When Filming in Egypt 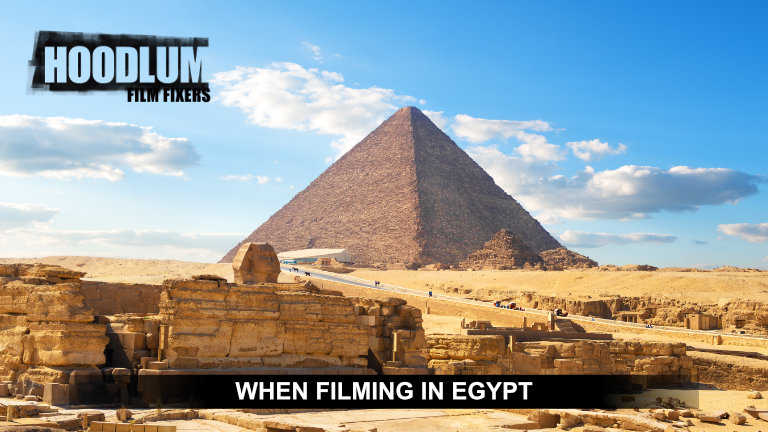 Egypt is in the north-eastern corner of Africa and is bordered by the Mediterranean Sea and the Red Sea, Libya to the west, Sudan to the south, Israel and the Gaza strip to the east. Egypt’s heartland, the Nile River valley and delta, was the home of one of the principal civilizations of the ancient Middle East and, like Mesopotamia farther east, was the site of one of the world’s earliest urban and literate societies. Egypt has an arid desert climate and is generally both hot and sunny. As part of the northern hemisphere, seasons in Egypt follow much the same pattern as in Europe and North America, with winter falling between November and January, and the peak summer months falling between June and August.

Winters are generally mild, although temperatures can fall below 50 degrees Fahrenheit (10 degrees Celsius) at night. In the Western Desert, record lows have dipped below freezing during the winter months.

Summers can be unbearably hot, especially in the desert and other areas of the country’s interior. Summer temperatures remain high at the coast but are made more tolerable by regular cool breezes.

Rain occurs in the cold season from October to May; but occasionally a shower may fall early in June, or late in September.

Egyptian public transport is, on the whole, pretty good. There is an efficient rail network linking the Nile Valley, Delta and Canal Zone, and elsewhere you can travel easily enough by bus or shared (service) taxi. On the Nile you can indulge in feluccas or cruise boat. For those in a hurry, EgyptAir provides a network of domestic flights. Travel permits are required for desert travel.

The incidence of crime, violent or otherwise, in Egypt is negligible compared with many Western countries, and you’re generally safe walking around day or night.” Most crime is petty theft, with little violent crime.

Egypt is one of the best locations in the world for filming. The lighting, weather and stunning landscapes alone make Egypt worthy of being on any film producers location list.

Most of Egypt’s film locations can be found in The Nile Valley and Delta with its ancient structures in desert landscapes and felucca’s gently sailing down the Nile River.

Cairo, the largest city in the Arab world, is a bustling metropolis of 10 million people. It is Egypt’s capital and main film production centre with Museums, Mosques, Souks, Al-Azhar Park, Cairo Opera House, Baron Palace, Abdeen Palace, Manial Palace, Bab Zuweila, and Bab al-Nasr, and Bab al-Futuh . Just outside the city you can find the famous Pyramids of Giza and Great Sphinx, the sole survivors of the Seven Ancient Wonders of the World. The Giza Museum is a beautiful modern structure.

Other ancient locations of note in this region include Luxor (Karnak Temple, Luxor Temple), the Valley of the Kings (tombs of Tutankhamun and Ramses II), Valley of the Queens, Deir el-Medina, Saqqara, Philae, Kom Ombo, Abu Simbel, Abydos, Temple of Horus at Edfu, Dendera Temple Complex, and the Tombs of the Nobles. Faiyum is one of the country’s oldest cities. Wadi al-Hitan is known for its whale fossils located in a desert landscape. Wadi El Rayan waterfalls are a beautiful film location.

The Suez Canal connects the Mediterranean Sea to the Red Sea running from Port Said to Suez.

The deserts east of the Nile River stretching to the Gulf of Suez and the Red Sea. The area is rich in natural resources including Egypt’s major oil fields.

WHEN FILMING IN EGYPT, NORTH AFRICA

What our film fixers in Egypt, Africa have to say about film & import permits and visas applications

Privately owned locations do not require a permit but attract a fee that is negotiated by local film fixers and location scouts. All other location require film permits and this process takes about 4 weeks. The application process is as follows:

1. The production company is required to send a letter to the Embassy in their country via email or delivered by hand. Making a direct contact with the embassy is preferable as you can then obtain the contact details for the person you dealt with at the embassy so that direct contact can be made when following up to ensure that the approval is sent onto Cairo.

2. The letter addressed to Mr. Mohamed Emmam, the Director of the Press Centre, Ministry of Information must outline what the shoot is about and who the client is (in general we call the shoot a documentary), dates for the visit, locations list, provisional shoot schedule, photocopies of crew passports and if possible a letter of support from the broadcaster/client. Address the letter to the Press Centre in Cairo and Cc. the local film fixer in Cairo. Cairo Press Centre office: cairopresscenter@gmail.com cairopresscenter@hotmail.com

3. Once this has been done the local film fixer will take-over on the follow up in Cairo. Please send the letters to the film fixer in Cairo for verification before you send to the above authorities.

The letter is addressed to the Egyptian customs, Cairo airport (Or airport of the city the client will enter and depart from – which must be the same) stating that the equipment will enter Egypt from date of entry to date of departure. The bank guarantees the equipment will be exported back to country of origin after filming. A sample letter can be provided by the local film fixer if required. On arrival in Egypt the original guarantee is handed to customs and a custom’s signed copy will be handed to client

On departure the equipment is checked by customs and the original guarantee letter is handed back to client. There is a cost for airport handling

Nationals from most western countries can get a visa on arrival which is valid for stays of up to 30 days. There is no special work permit required to film in Egypt.

WHEN TO FILM IN EGYPT

The Mediterranean coast is mild and wet, while the Sahara in the south is hot and dry. Egypt has two main seasons, a mild winter from November to April and a hot summer from May to October. The shoulder periods from February to April and September to November are the best months to film for costs and weather.

Most of Egypt’s festivals and events are based on the Islamic calendar. Mawlid an-Nabi parades and processions take place in cities across Egypt during the fifth month of the Islamic calendar. Leylet en Nuktah is celebrated in June. Ramadan is widely observed with many services limited or closed during this period.

Public holidays may affect timing, availability and costs. Local film fixer will advise on these

Egypt is one of the least expensive shoot day costs in the Middle East Region. Egyptian Film fixer / service producer will negotiate local deals and provide the appropriate level of production support to match every budget.

At present there are no tax incentives for foreign commercials or feature films shooting in Egypt.

Egypt has a large choice of experienced local crew and Film directors available in Cairo and Alexandria.

Talent day rates and buyouts are negotiable. Talent costs are some of the lowest in the Middle East. In terms of local looks, nearly all citizens are ethnic Egyptians. Very small minorities of Bedouins, Berbers and Nubians also exist. All other talent needs to be cast abroad.

All the standard camera, grip and lighting equipment is available locally including Motion Control and Technocrane. Specialized equipment must be easily brought in from nearby European production centres or Dubai. Egypt is not an ATA carnet member country. You will need to have a permit to bring film equipment into Egypt so allow at least a month for processing this permit. Egyptian service producer / film fixer handles the import and export process for all film gear. Drones cannot be brought into country. Special permits are required. Only 1 company is authorised to fly drones in Egypt and its costs Euro2750 per day